For Kortnie's 2 Year D-Aversary, you already know I was in a funk, but I let the kids have a celebration anyways.

Kortnie and her sister had coupons for a free Personal Pan Pizza from Pizza Hut from the Book It program, so we let them use their coupons and we bought a 3rd PPPizza for our son. I also happened to have a coupon for a free 8inch single layer cake from Basha's bakery, so we went and got our free cake and bought a thing of ice cream. Kortnie picked out a marble cake with chocolate frosting and strawberry ice cream.

We brought it all home and they had a fine feast, then we played a game of pool.

Also, on Kortnie's 2nd D-aversary, Brian took me into town and bought me a new truck! A 2003 Ford Expedition, Eddie Bauer, a red one. We traded in my van for it. He'd been thinking of getting it for a week or so, and since he works for the car dealership people he got a fairly good deal. (He works as a mechanic at Show Low Motorsports which is owned by the same Hatch's that own Hatch Toyota). Later that evening when I posted a picture on Facebook of my new truck, quite a few people thought he had gotten it for me as a D-Aversary present because I'm such a good D-Mom. LOL...I don't think that's why he got it, but I guess I'll let my friends think that. (I had posted earlier in the day how I was all pissed off and depressed and in a bad mood because I hate Kortnie's diabetes, so they thought that's why he got me the new truck) Yeah, so now everyone thinks that he's an awesome husband or something. Well, I guess he's alright, I'll keep him. :-) And the other thing that happened on Kork's D-aversary weekend was that our dog got some kind of puncture wound, the best we can tell is that he got it climbing around on the wood pile outside, he was just not acting himself and not eating or drinking so we took him to the Vet, after we got home from buying the new truck but before the D-aversary pizza dinner. It was hard for our kids to see our dog all sick, but the Vet gave him some antibiotics and made sure there wasn't anything stuck in the puncture wound and he's all better now.

All in all the day turned out to be okay, I was mad and sad, I got a new car, the dog had to go to the vet but the kids learned a lesson about taking care of their dog, we had pizza, cake and ice cream for dessert, and played a few games of pool. 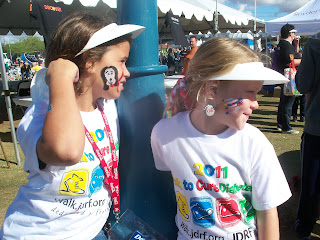 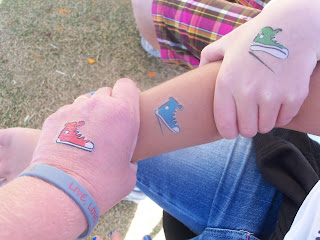 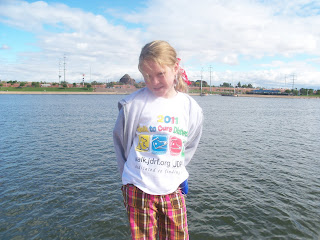 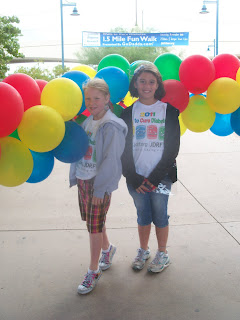 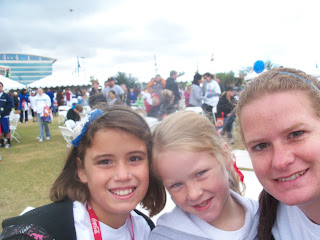 Last Saturday, November 5th, the girls and I participated in the annual JDRF Walk to Cure Diabetes. It was held at Tempe Town Lake in Tempe, AZ. This years theme was Blast off For a Cure. This was our 2nd year participating as a family team. It seems that I participated in this walk something like 8 years ago with a friend of mine who's husband was with the Ford Motors company team. (I mentioned this last year when I posted about the 2010 walk, but ironically, at this JDRF walk 8 years ago, is when I first annouced to my friends that I was pregnant with Kortnie).

Our family walk team is called Kortnie's Krusaders. This year we have raised a total of $1049. We got online donations from family and friends, the girls went door to door and sold some of the JDRF paper shoes and they made over $100 that way. My friend Becca Martin donated a Photo Session and we raffled that off, we made around $215 with that.

This year, my husband just wasn't able to get off of work to come with us, so we asked his mom to watch our son, and my girls and I went down for the walk and made it into a girls weekend. We left Friday afternoon after school to drive down. It's about a 3 1/2 hour drive for us. We got to the Valley and did some shopping at the craft store and Trader Joe's, then we went to our hotel, we got some dinner and sat in bed and watched Wizard of Oz. Saturday morning the day of the walk was pretty cold for the Phoenix area. It was in the 40's, cloudy, a bit windy, and dark. Definitly not the sunny warm day we were hoping for, but the rain stayed away so that was great. We opted to do the 1.5 mile Family Fun Walk rather than the 3 mile. Kortnie really wanted to do the 3 mile walk, but about 1/2 a mile into the shorter walk she was already tired of walking, so it's a good thing we did the shorter walk.

There were tons booths and fun things to do. Before the walk we saw some local news and radio guys on the stage, we did a Zumba warm up and we visited a few vendor tables both before and after, afterwards the girls were able to paint pumpkins and get their faces painted. Kortnie got some sticker/skins for her Accu-Check, she got matching pink skins for her pump/remote. Also two skins for her At the Coke Zero booth you were supposed to answer a question and then drop a ball into a "plinko" like game to get a prize, but they LOVED Kortnie's Diet Coke earrings so they only had her answer one question and then they gave all 3 of us both prizes, a anniversary glass bottle of Coke and a pick from a bucket of other prizes. She actually got tons of compliments on her Diet Coke earrings.

The walk this year happened to be 2 days before Kortnie's 2nd D-aversary (anniversary of diagnosis). I had felt this 2 year mark looming since Halloween. I was kind of feeling in a funk about everything, I even mentioned on Thursday afternoon that I didn't even really want to go to the walk, but we'd planned a girls weekend, my girls did such hard work fundraising, going door to door and selling raffle tickets, that I felt like even though I didn't want to go, that they deserved to go. I'm glad that we went, it was uplifting, the girls had fun, and even though I walked around with tears in my eyes most of the morning, they were good tears and ones that needed to be shed.

After the walk, we did some more shopping and went out for a late lunch before heading home. Walking around Mesa and Gilbert with all 3 of us in matching walk t-shirts and the girls faces painted, we got quite a few questions about where we had been and what we had done that morning and it gave us the oppourtunity to educate and advocate. The cashier at Sam's Club told us his fiance has had Type 1 since she was 4 years old and he even asked Kortnie if she had a pump and then told her it was the same one as his fiance. (the Animas rep also had a Pink Ping, Kortnie loves to see people with the same pump as her, one time at the grocery store here in town, she saw a girl with a green one, and one time at Disneyland we met a girl with a pink one).

So, it was a good day, we were able to raise some money, we had a good time just us girls and my spirits were uplifted some.
Posted by Amanda at 6:36 AM No comments:

It's been 2 long years since Kortnie was diagnosed with Type 1 Diabetes. I'm not in a happy feely kind of place about it, not like I was last year on the 1 year D-Aversary. I'm kind of pissed off, I'm kind of like, "why me, why her, why us". Diabetes SUCKS! It's a fickel nasty Bitch.

Kortnie is okay with it, I guess, she just wants to eat a bunch of junkfood, I think last year we had Pizza and Root Beer Floats. I told her yesterday that Diabetes Sucks and she said, "no", I said, "well is it fun, do you like having it?" she says "no, I guess it kind of sucks". I feel like I put those negative feelings into her head and now I feel bad for that too.

My son had these scrapes on his back last week, right along the backbone, like scabs. I pointed them out to my husband and told him that Kortnie used to get those too, bruises and scabs along her backbone and I wondered out loud if Graham would develop Diabetes too. (I'm pretty sure these scabs are from them being so skinny and the way the bones rub on their skin, but since Kortnie was dx'd her bruises and cuts have come way down, I always wonder what the correlation between pre-diabetes and her bruises was). Anyways, my son heard us talking, the next day he told me (he's 4) "I know that little boys don't get blood sugar", "I know that little boys don't have to do site changes". Well, son, sorry to say that yep, little boys do get blood sugar and site changes. Great....Now I've put some negative thougts into his head too.

We did the JDRF walk this past weekend, November 5th. It was a great time, the girls and I went by ourselves. They really enjoyed themselves, Kortnie scored some cool pump and meter skins. She was high off the walk excitement when I put those negative Diabetes Sucks thoughts into her head. I had a good time too, but I did walk around crying most of the time, people were looking at me with symapthy in their eyes, but I think they probably mostly understood my tears. More on the walk later.

I think I'm really going to try to post more often, I have lots to say, lots that I think about and I love reading everybody elses' posts. I'm trying to comment more often, but I never think I say what I want to say the right way, I'm not an eloquent writer. I feel like I'm more just a string of babble. Well, I just wanted to aknowledge 2 YEARS here in the DOC. Even though I'm kind of pissed and sad or whatever, I want you DOC'ers to know I'm thankful for all of you.
Posted by Amanda at 7:24 AM 2 comments: